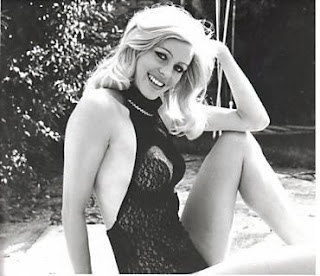 Blackpool’s finest in a 1977
“Come
Play With Me” publicity pic
Posted by gavcrimson at 23:17 No comments: 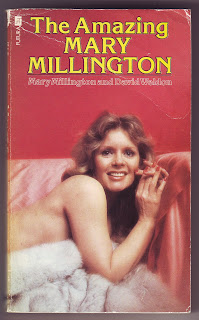 Mary’s biography “The Amazing Mary Millington”, co-written by Mary and her former probation officer David Weldon was published in 1979 (and reprinted as an A4 size magazine in the 1980s by David Sullivan). Mary’s life in her own words sounds an enticing prospect, but approaching the book today comes with the knowledge that it contains more than its fair share of tall tales and fabrications about her life. As the book also had its eye on the titillation market there are also lots of (made up sounding) sex anecdotes, reminiscent of Mary’s many ghost written articles in David Sullivan’s magazines, that are presumably the work of co-author Weldon whose later novelisation of The Playbirds was penned in a similar style. Mary doesn’t hold back her views against censorship and for the legalization of pornography, in fact its one of the book’s main themes, and something she comes back to constantly in the text, over and over. To the degree that later chapters of her book feel like impassioned plea for freedom of expression and a more liberal attitude to sex and pornography first and an autobiography second. She even re-writes her life story at one point, claiming the John Lindsay hardcore loops she made were shot after she became famous, and as a political protest at the strict UK censorship laws. The obscenity laws, the police and the hypocritical nature of those in power, are clearly subjects that plagued her while she wrote the book, while in earlier chapters she displays polite distain for the likes of Mary Whitehouse (“I respect her right to say what she likes… but what I didn’t like was the way she tried to ram her opinions down everyone else’s throats”) by the books end things take a more angry turn, with Mary militantly signing off the book with “demand the right! demand the right to choose for yourself” and including a lengthy report by the national campaign for the reform of the obscene publications act as an appendix. While its often hard to shift through what is fact and what is fiction at times, included here are several passages where Mary speaks about her career and subjects close to her heart, and where the text seems at its most honest and believable.

Childhood
“In many ways my childhood was both very sad and very happy. I didn’t want for love and affection but a great many other things were missing. Most children can find some sort of escape at school. I couldn’t. I hated it, and they hated me. I tried to hide myself at the back of the class, and day dreamed about being a princess and that someone would arrive at any moment to rescue me from this hell. Mum often tried to console me with the fact that I had the same birthday as Winston Churchill and that he was a bit of a dunce, one day I might become as famous as him, and every time I was beaten, or told what a useless individual I was, or what an illiterate idiot I was, I would think about Winston Churchill and vow that I would become famous one day, that would show them.”

Meeting John Lindsay
“we were having coffee (and) he suggested that I pose for him in his studio. At first I thought he was just shooting me a line but he showed me his press card and seemed to be very genuine about his proposal. I asked him what sort of pose he had in mind, and he replied, as if you couldn’t guess- ‘in the nude’. I was a little doubtful about it, not for any moral or prudish reasons, but at 4‘11 I thought I was too small to be a model. He said he thought my personality would more than make up for my lack of inches.
I was a little nervous but he was very reassuring and soon I was able to relax and become my natural self. I found that I enjoyed being the centre of attraction and loved the fact that the camera was pointed at me. Like all good serious photographers he was in love with his camera and only his camera, to him I think I was just a lump of meat. In some ways the camera seemed to fulfill my craving for affection and I came to realize I was treating the camera as my lover and the fact that more and more people wanted to point one at me, made me feel very wanted”

Miss Bohrloch
“I’m not saying the film was good but the last I heard it had sold over 300,000 copies, which is some sort of world record where blue films are concerned. If you ever get the chance to see it, then do, you won’t be disappointed. Charlie (Brown- the owner of the Tabu company that released many of John Lindsay’s films in Germany) also paid me a very nice compliment. He said that if there was such a thing as an Oscar for blue films then I should get it for my performance in that film. I could just imagine it. The Oscar ceremony in Hollywood, Steve McQueen or Paul Newman standing on the stage. The lights flashing, the spotlights blasting down, and the crowds cheering. Steve introducing a clip from my film then presenting me with the Oscar for the years best oral sex performances”.

Homosexuality
“It may be going against convention to enjoy making love to a member of your own sex; I personally get turned on by a couple of good looking gay guys. I know straight men are repulsed but as long as the partners concerned are agreeable, so long as they do no harm to anyone, then I see nothing odd in it.
It is true even in this day of so-called permissiveness that homosexuals may not freely consort, meet or form new associations with each other without…. threat hanging over them. It is quite common in 1979 to see notices in male public toilets forbidding importuning. In effect the Wolfenden Report and the law following it is followed, officially at least, to the letter- you can do it if you’re old enough. But, it must be behind closed doors. I despair at the laws in this country.”


Come Play With Me
“There were some really beautiful girls in it. I enjoy working in films, the people in the business are fascinating but oh, those hours. I’m nocturnal and to be on a set at 6am is like the middle of the night for me. When the reviews appeared I was shocked when I found that not one single critic had liked the film, one of them said it was the worse British sex comedy that he had ever seen.
Even now when I’m supposed to be a personality or infamous, depending on your point of view. I still make a great deal of personal appearances. I meet as many fans as possible, and most days I visit a sex shop which I help run in Tooting, South London, and talk to the customers and find out what they like, or dislike, about my work. I really do like people and reckon I’m the most “approachable” model and film star in the business. If it wasn’t for the man on the street I wouldn’t be where I am now and I’ll never forget that fact. I feel a great obligation to them, and I feel very privileged when they travel for miles just to see me in the shop.”

The Playbirds
“David Sullivan sent me a film script. He had commissioned it with me in mind, he asked me to read it as quickly as possible as he wanted to start shooting right away. The part was that of a policewoman, and I just loved the irony in the casting, although I’ve never seen a 4‘11 policewoman.
There are black magic scenes, sex scenes, party scenes, a very good ‘chase’ scene, in fact everything that goes to make up a first class modern day thriller.”


Sex, Censorship and Pornography
“It is time the whole obscene publications act was rewritten so that everyone knows where they stand. Publishers do not wish to break the law any more than anyone else, but until that particular law is redefined then publishers have to stagger on from day to day not knowing if what they have published is obscene or not in the eyes of the law, we entered the common market but censorship which is virtually abolished there did not come along with the butter subsidy.
Surely this clamp down on girlie magazines goes against the whole basic freedom of speech and choice that we hold so dear in this country. Democracy had to be fought for in this country over the years, and it was not an easy fight. Demand that you be treated like an adult. Perhaps we can make porn legal and then, a few years afterwards, the novelty will have worn off, the sales of porn will go down, and we can get on with more important things.
I’ve always thought that the paranoia in this country about sex is a class thing, just as much as public schools and comprehensives are. The old story of those in authority saying they know what is best for the rest of us while doing the opposite themselves, and using the excuse that the “working classes” aren’t educated enough to be able to chose for themselves. I think this is a grave insult to the man in the street. At election times we are supposed to be able to pick our way through complicated political issues before casting our vote; but when it comes to reading matter we are treated like children.
I treat sex as something to be enjoyed, something to be savored, something to cling to, something to be indulged in whenever possible. The old slogan of ‘Make Love Not War’ was a very good one. This love of sex may be a throwback to my childhood days when I craved for love and affection, I just don’t know. But even if it is, so what? Self-analysis won’t change anything now.”
Posted by gavcrimson at 01:44 1 comment: