Battle of the Beasts: UK Vs France 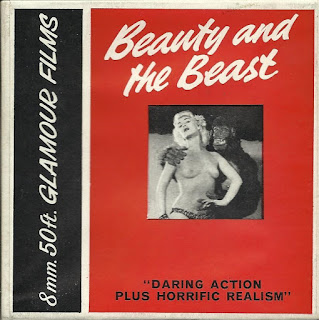 Escaped gorillas running amok and terrorising naked ladies was the theme of at least two competitive 8mm glamour films from the late 1950s/early 1960s. The first, homegrown affair ‘Beauty and the Beast’ was the work of Stanley Long and Arnold Louis Miller. Long apparently didn’t think much of this early effort of his when he was reunited with it a couple of years before his death, and therefore may have regretted sending me a tenner for my 8mm copy of it. The second gorilla themed 8mm glamour film ‘Visite Impromptu’ was French made, and released on 8mm in the UK under the title ‘Beauties and the Beast’. The largely undocumented nature of the 8mm glamour film market of this era makes it difficult to say which film was released first or whether one stole the other’s idea (the sound-alike titles and similar themes do point to a degree of plagiarism here).

As to which film is the better of the two, the cineaste in me is leaning towards Visite Impromptu, it benefits from outdoor location work, the luxury of a French chateau setting and a more elaborate plot. The fact that Visite Impromptu also has more nudity and female cast members than Beauty and the Beast were likely plus points for the 1960s 8mm glamour film audience as well. Still I have to admit if this were simply about gorilla costumes then the Long film would be the clear winner here, the one in Visite Impromptu is an absolute shocker.

Posted by gavcrimson at 23:29 No comments: 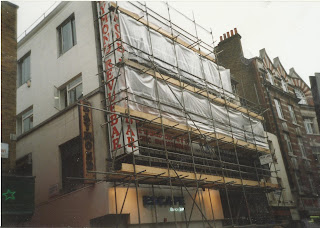 On a rainy, dull day I found myself with a few hours to kill, and since I was in a preservationist mind-set decided to spend it scanning a couple of the photos I took of London during the late 1990s and early 2000s. As we’re talking about pre-digital camera photos here, these now only exist as physical copies which are prone to wear and tear and so perhaps the quicker I get these scanned the better. I was commuting from Manchester to London fairly regularly back then and as these trips tended to be of the 24 hour variety (setting off at some ungodly hour in the morning and riding home on the midnight train) I had to cram in a hell of a lot during a brief amount of time, meaning that my trips to London were never anything but action packed.

My cineaste and sleaze tendencies inevitably drew me towards the West End, and Soho in particular. It was a great place for a spending spree and various misadventures, usually starting with a trip to Tower Records in Piccadilly Circus before escaping the hustle and bustle of Piccadilly Circus in favour of the sights and sounds of Soho. There are inevitably many wild tales to accompany the photos I took of that place, from encountering a man with a python around his neck who was casually strolling around with said animal and doing a brisk trade in taking photos of it with tourists, to shops with crude, hand written signs offering the leaked sex tape of flavour of the month Abi Titmuss (“Abi Titmuss discreetly filmed, on sale here”), to seeing a squad of armed policemen bursting out of the back of a van and raiding a sex shop for selling Viagra (this was during a brief period in time when the blue pills had initially been banned by the government, only to see the country being flooded by counterfeit Viagra as a result). It seemed like there was rarely a dull moment in this place, wherever you looked there seemed to be subjects worthy of their own mondo movie segment, and I wanted to document as much of it as I could.

Decades on, the exact dates I took these photos has begun to escape me, I do remember one of my trips to London taking place on the same day that Spike Milligan died (and being driven nuts on the trip to London by hearing the ‘ying tong song’ played constantly on the radio by way of a tribute) meaning that I must have been there on the 27th February 2002. Some of the other photos date from 2004 as they document what would turn out to be the final days of the Raymond Revue Bar, which at the time just looked as if it was being renovated what with all that scaffolding out front, but was in fact in the process of closing. I seem to remember the sign on the door warning workmen that ‘hardhats must be worn at all times’ was causing multiple giggles from passers-by and jokes about the audience now needing protection from all the bouncing boobs being flung about in that place. In fact the guts of the Revue Bar were being unceremoniously flung into black bags by the workforce and left outside the place for the garbage men in collect. In retrospect I should have tried to salvage a few mementos. A swivel chair with Paul Raymond’s initials embossed on it was particularly tempting, who knows maybe PR had once fucked Fiona Richmond on that chair, or done a line of coke with his daughter Debbie off it, sadly the impracticality of wheeling a swivel chair around the streets of London and sneaking it onto a late night train meant that this was one piece of British sex history that not even I could save from the rubbish tip.

Merely attempting to document this place meant you were taking your life in your hands, people, you’ll be unsurprised to learn, don’t really like the idea of being filmed or photographed in the context of a red light district. I remember once arriving there to find the place unusually deserted and quickly discovering that the reason for this being that the BBC were there filming ‘Crimewatch’, and the idea of being captured on film as an extra in a Crimewatch reconstruction was keeping many off the streets (if you are curious about the Crimewatch piece, it involved a punter who’d been shaken down for cash by a strip club’s heavies then dumped back onto the streets, only to return in full on vengeful Cover Girl Killer mode and murder one of the strippers right outside the club). I’d get my own taste of the violent side of Soho when, after taking one of these photos, I was approached by a rather menacing individual who confronted me with “hey mate, did you just take a photo of me, I’ll thump your face in if you did”. Naturally I denied everything and seem to recall making some bullshit claim about there being no film in the camera, and I was ‘just testing’ to see if the camera worked. Did he buy my story? Probably not, but I ran off before he could reply anyway.

Now, I confess, it has been years if not over a decade since I’ve been to Soho. Word through the grapevine would suggest that photos like these are museum pieces these days, and I’ve heard all the horror stories about the place being gentrified, sterilised and generally having the naughty soul ripped out of it by a new generation of entrepreneurs. Will I ever go back there? Probably not, and why would I, far better to remember the place as it was, rather than risk sullying those memories by setting eyes on it as it is now. Maybe being out of the loop for so long has numbed me to the crushing blow that the death of the old Soho should perhaps be to me, but every story has to have an ending, and I just think that the older you get the more you become resigned to the fact that places, like people, change, sometimes they change beyond all recognition, sometimes they turn into things that you don’t like, and sometimes they disappear altogether.

Lets not look back at old Soho through rose tinted spectacles though, no one ever opened a sex shop, strip club or near beer joint solely for the benefit of all mankind, they were all in it for lust and profit as well. Time marches on and the West End Jungle has always been adept at finding new ways to drag punters in off the street and lighten their wallets, whether it be through the wine bars and blowdrys of today’s Soho, or the strip clubs and blowjobs of yesterday’s Soho. Still I’m glad to have been an extra in the Soho story and to have witnessed the tail end of that dirty, neon lit carnival, and yes, I do think it is sad that future generations will never get to experience the Soho that I knew. Maybe in the future some sleaze hungry kid will look upon these photos with a mixture of wonder and envy, much as my generation did over the membership only cinemas and dirty book shops of the 1970s that we’d been born too late to experience first-hand, as well as of course the idea of sexploitation films as a communal, big screen experience rather than a home video one. So sit back, listen to ‘Welcome to Sleazy Town’ by The Kinks (cause R. D. Davies can sum up this subject matter far better than mere mortals like you and I), and enjoy this blast from the past, I promise no one will come round and threaten to thump you in the face for looking…. 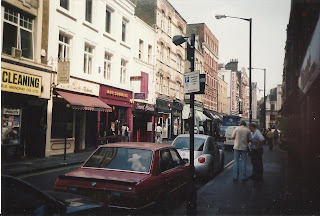 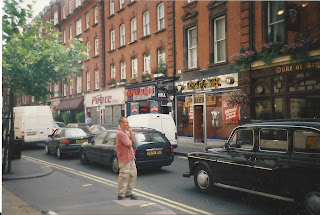 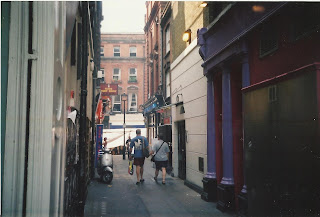 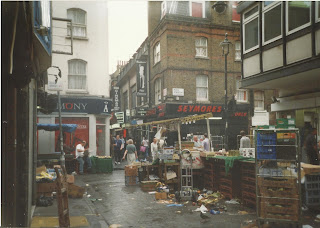 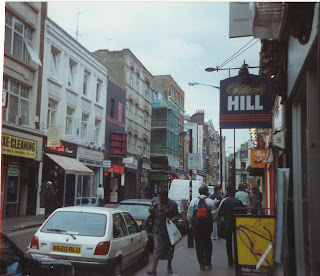 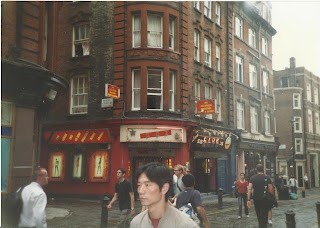 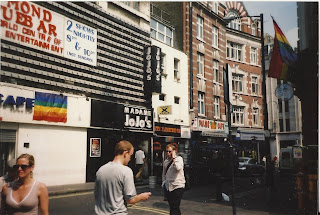 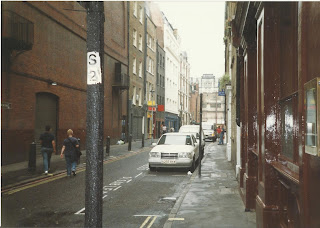 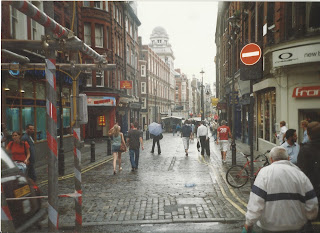 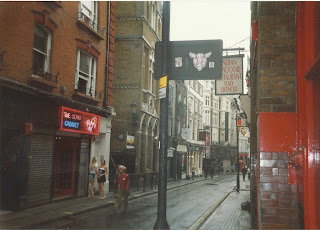 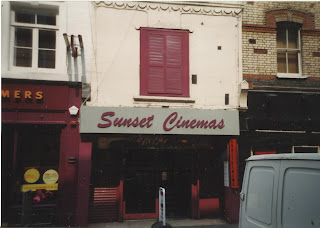 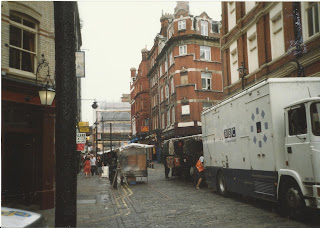 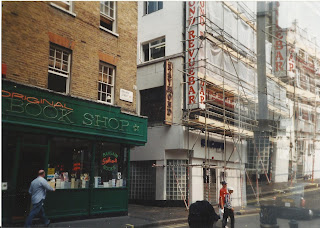 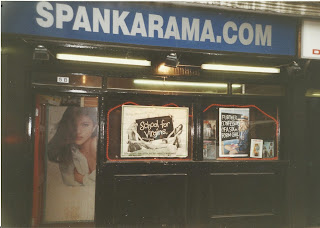 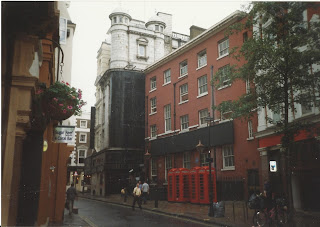 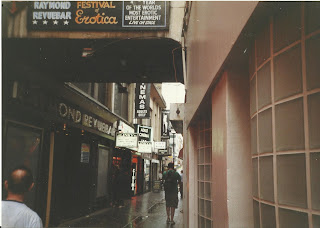 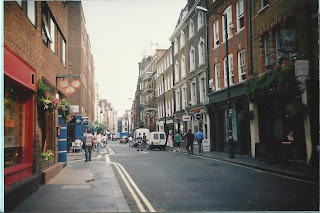 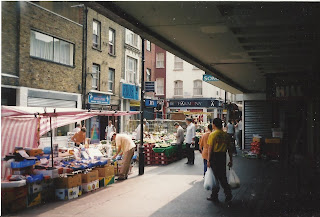 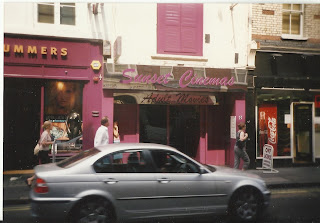 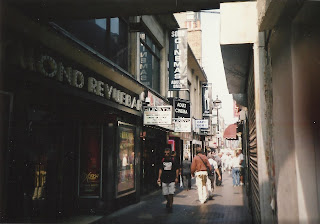 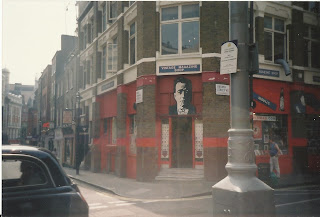 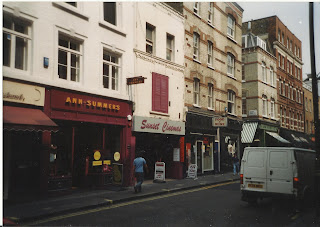 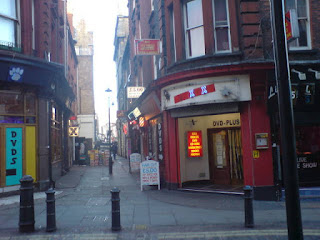 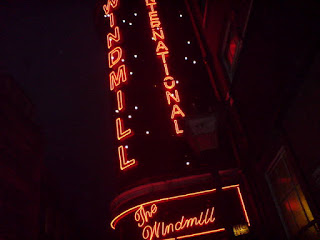 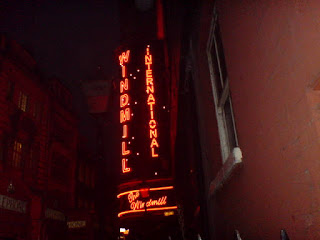 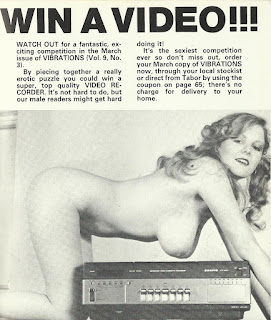 From the early days of Video (Vibrations magazine circa 1980)
Posted by gavcrimson at 00:05 No comments: