Early Michael Winner film, one of several threadbare thrillers he shot for E.J. Fancey in the early 60s (as well as the nudist film Some Like It Cool). Might be worth a look, can’t be any worse than Winner’s The Cool Mikado can it?.

Update: Well... ‘threadbare’ was definitely the right word for that one, lots of wooden acting (especially from the heroine and the chap playing the antiques dealer), an hilariously cheaply staged car crash, and even a young Pete Walker in a small acting role.
Posted by gavcrimson at 06:18 No comments:

Sex and the Other Woman : A Tale of Two DVDs 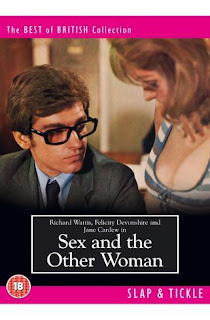 Finally had a chance to compare the UK and US Discs of Sex and the Other Woman over Christmas. As already mentioned the US disc is shorter than the UK one (the running time of the US DVD is 1:19:46 compared to the UK running time of 1:23:41), but that is only half the story as the film has been substantially re-edited for its US release.

The first difference between the two versions is that both have different title sequences, the US titles play over stills of Felicity Devonshire (billed as Felicity Devon in the US titles), while the UK titles play over footage of Henry being dragged around shopping by his wife, as a result the US version is missing some footage from the opening scene and only cuts to the scene when Richard Wattis’ narration kicks in. The credits in the US version are also allot less extensive than the UK version, depriving you of a cheap laugh over the name of the film’s production secretary.

The first two episodes have been flipped for the US release, originally the film opens with the Maggie Wright story then the Jane Cardew story, which is the way it plays on the UK disc, but evidentially the US distributor thought that Jane Cardew’s bits should be more erm… upfront, so its her story that appears first in the US version.

Flipping the two initial stories about results in Richard Wattis’ intros being re-edited, and cut short for the US version, but most of the cuts in the US version actually take place during the Maggie Wright story. The US version cuts from her arriving home from playing tennis to her and Reggie, the character she is having an affair with, taking off in the plane, deleting in-between sequences of her plotting to seduce him (whilst miming playing tennis in a mirror), the pair of them driving to the airfield and the plane starting. After the airplane sex scene (“please report your exact position”), the US version deletes part of the following scene at the photo shoot, removing a conversion between Maggie and the other model and the camp photographer issuing orders to the pair of them (“tits out, fannies up, tums in”).
The ending of the story is also cut short in the US version, the US version ends with her telling Reggie she is leaving him, whereas the scene goes on longer in the UK version and sees him trying to stop her from leaving and getting kicked in the balls for his troubles, Wattis’ comment about this “well, I suppose he asked for that” is also absent from the US version.

As well as the Wright story being cut down, the film has been re-scored for the US version as well, with different music and sound effects used for the Wright, Cardew and Felicity Devonshire stories, whoever did the re-scoring must have got bored towards the end though as the music in the final story, is identical in both versions. I can only guess that the US distributor considered the original UK score to comic or early 70s in tone (I don’t think the film was released in the USA till 1980, when this re-editing and re-scoring must have taken place.)

Picture quality on the UK disc is far superior as well (the print used for US disc is very dark), so if you’re interested in seeing the film, the UK DVD is really the way to go.
Posted by gavcrimson at 02:12 No comments: 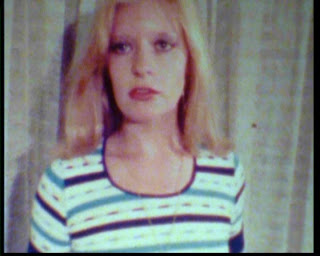 An 8mm copy of the ‘lost’ Mary Millington film “Special Assignment” turned up on E-bay, shortly before Christmas. After being tipped off about the auction, my original plan was to have Millington fan ‘RBT Foot’ bid on the film, then for he and I to pay to have the film professionally transferred to DVD, however (as I suspected might happen) bidding went crazy on the film, and our plan didn’t come to pass as The Foot got outbid by a sniper bid at the last minute. So we had to go to Plan B and contact the E-bay seller, and ask him to make and sell us a DVD transfer of Special Assignment before he sent the 8mm film on its merry way. In a perfect world it would have been better to have got hold of the original 8mm film and do our own DVD transfer, as in my opinion it would have been superior to the one done by the Ebay seller, which is somewhat cropped and the transfer speed a little out (everything seems slightly slowed down). Still a “new” Mary Millington film resurfacing isn’t something to be sniffed at, especially as Special Assignment -one of her early John Lindsay hardcore shorts- hasn’t been seen since the early 70s, bar a ‘safe’ clip from the film turning up in the 1980 documentary Mary Millington’s True Blue Confessions, where it was used to represent her early blue film career. The tame bit of Special Assignment, as seen in True Blue Confessions, sees Mary exploring a canal lock and retrieving a hidden package, this is about all they could use from it in True Blue Confessions, since as you might expect from a John Lindsay production things get pretty pornographic soon after when Mary delivers the package to her horny boss and ends up as part of a threesome. Sexually, the film employs Mary in a strictly lesbian capacity, thought she does ‘supervise’ some heterosexual action between her boss and the film’s other female cast member towards the end, and as in Mary’s other porn shorts like “Response” and “Oh Nurse”, the girl on girl moments tend to register far more erotically than the routine straight sex. Its been suggested that Mary’s character in the film is meant to be a spy, which makes sense given the “Special Assignment” title, but as is the norm with John Lindsay films any plotline is strictly throwaway and hardcore sex is really all the film is about.

As a result its a little hard to represent the film in screenshot form here, so I do hope you all like photos of a girl and a canal lock!!!, but DVD editions of the film have started to appear on the collector’s circuit, and hopefully will make there way to Mary’s many fans
Posted by gavcrimson at 01:36 No comments:

I was lucky enough to spend Christmas 2009 in the USA with the great British sex comedy legend Suzy Mandel. We’ve actually known each other for a couple of years, and become great friends, but this is the first time we’ve met. What can I say about Suzy, she is simply a divine woman, who greeted me at the airport with flowers, signed one of the pictures I brought her to autograph “from Auntie Suzy”, and we’ve become so close I do genuinely think of her as a family member, and our friendship means so, so much to me. I have some memories of Christmas 2009 that will stay with me forever, including having Christmas dinner with Suzy at the Royal Palms Hotel, the inspirational words she said to me over New Years Lunch, the whole day we spent together going through her incredible collection of clippings, photographs and photo shoot negatives (some of which have never seen the light of day before, and which we hope to put to commercial use at some point in the future.) Not to mention her many tales from the British Sex Film era, and her life in Hollywood in the 1980s, which kept me amazed all over Christmas.

Personal message to Suzy: your friendship continues to enrich my life and makes me feel so special. You can be my Auntie Suzy anytime, Sweetie!!! Lets aim to try and go on vacation again in 2010, say Hello (rather than ‘Hi’) to Kimo for me, and take care,
Big Hugs from Gavin (“adopted nephew and part time teaboy”).
XXXXXXXXXXXXXXXXXXXXX 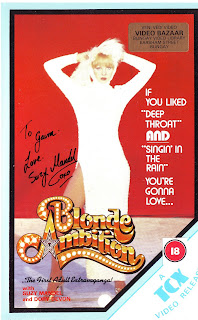 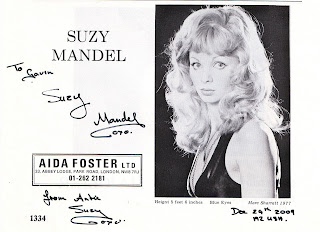 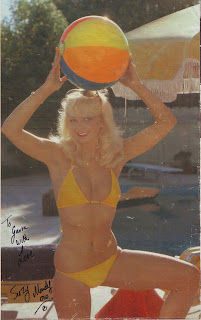 Posted by gavcrimson at 17:45 No comments: