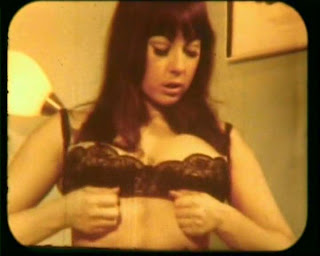 As a little thank you for sending her a DVD of the early Pete Walker glamour film “The Intruder”, which I had transferred from 8mm back in December, Teri Martine sent me a DVD she has had put together of eight glamour films from the 1960s that showcase herself and her friend June Palmer, the original “Teri and June”, if you will. June’s early 8mm glamour films were directed by Harrison Marks, before June entered into the business side of things herself, setting up Strobe Studio in Clapham, whose 8mm glamour films were all directed by June’s partner Arthur Howell with June, understandably, as the films main focus of attention. 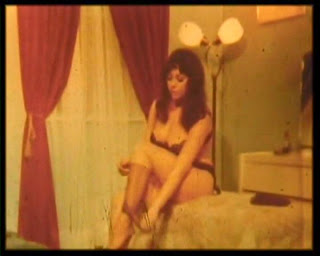 While many of the 8mm glamour filmmakers around in the 1960s fall into the category of chancers whose cinematic aspirations rarely went beyond documenting a simple striptease routine, the Strobe films were notably ambitious affairs, often riffing on popular film genres and titles. One title “Calamity June” (not on Teri’s DVD) was even a fully fledged oater with June as a gunslinger who gets her clothes shot off in the midst of a barroom shootout. As Arthur was also a stuntman by trade, and had worked on the early James Bond films, his 8mm glamour films weren’t afraid to get physical either. MISSION POSSIBLE and SPECIAL AGENT both cast June as a spy, and were mostly filmed at her flat. In Mission Possible she is sent orders to take out a rival agent, burns his picture, gets dressed and goes on his trail. Only for things to get kinky when she is overpowered and tied-up by her brutish target. In SPECIAL AGENT its June’s turn to be trailed back to her flat by murderous spies, resulting in a knife throwing assassination attempt, a gun fight, and ending with June throwing some poor schmuck out of a window. June punches and kicks her way through the films like a British, Swingin’ Sixties version of Tura Santana. 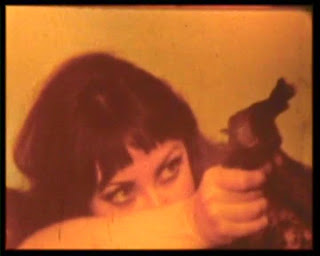 A less aggressive June is on display in PHOTO SESSION (1963), the first George Harrison Marks film on Teri’s disc. Doing exactly what it says on the tin, Photo Session was filmed at Ewhurst manor house in North London, a favorite location of GHM, and sees June and Marks fagging it in the garden before planning and executing a nude photo session. As June runs around the garden in a see-thru nightie, a young GHM merrily snaps away with his bolex, until both need a break, which provides a good excuse for them to start fagging it again (it has to be said, June does smoke allot in these films). 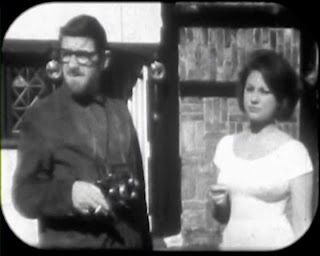 A more commonly seen GHM title STAR STRIP (1964), is another simple affair with June preparing herself in her dressing room, before performing a strip act onstage. Apart from the nudity, Star Strip is distinguished by the oddball presence of Marks regular Stuart Samuels as June’s accompanist who beams at June from the sidelines and plays the violin as she strips. No early GHM short is really complete without Stuart sticking his bald head and huge nose into the proceedings. Under heavy ghost face make-up, Samuels is even more exaggerated looking than usual in Star Strip, resembling a stray ghoul from Carnival of Souls, than the one time music hall comedian Samuels really was.

Teri herself takes centre stage in Harrison Marks’ THE MUMMY (1966), a film I’ve written up for the ‘Shrieking Sixties’, British horror films book, (which includes a couple of quotes from Teri). This Marks film sees a mummy rising from its tomb and peeking in on topless harem girls before making a grab for Teri. Played completely straight, the Egyptian themed sets, green colored lighting design, and mummy itself are all top drawer, and wouldn’t shame any Hammer or Amicus production of the period. Teri is on slightly safer ground in the anonymously made A DAY IN THE COUNTRY, which illustrates the problems of taking a nudist holiday in the British countryside, such as the terrible weather, and having your nude snooze in a field interrupted by a passing herd of cows !!! 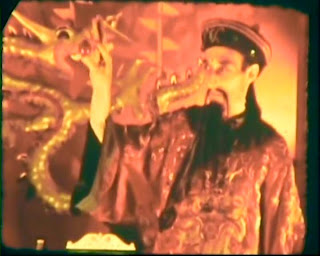 June and Stuart Samuels return in GHM’s CHINA GARDEN (1966) in which June falls asleep in the company of a boring vicar (Stuart) and dreams she is in a china garden where Stuart pops up as a Fu-Manchu type character who uses magic to make her clothes disappear. It comes across as an early version of the ‘Lotus’ segment of GHM’s later feature film The Nine Ages of Nakedness, which may have been filmed on the same sets. 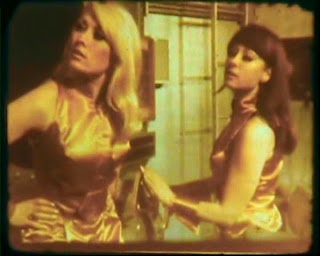 Teri has saved the best till last though, JUNE IN ORBIT, an Arthur Howell/Strobe film, stars Teri and June as astronauts traveling around space in their UFO. A pesky meteor shower results in Teri and June throwing themselves around the set, while the camera tilts around wildly, just like in an episode of Star Trek. The meteor shower also has the knock-on effect of heating up the UFO, resulting in outer space striptease routines from Teri and June. Howell had an entire space ship set put together for the film, and throughout displays low-budget ingenuity worthy of Ed Wood.

According to Teri, the spacesuits were made by June’s cleaning lady, the meteors were painted sponges, and the explosions on the ship were archived by having their friend Pat hide behind the set, smoke a cigar, and exhale huge breaths of smoke. Had the film been made with live sound all you would apparently have heard would have been the poor man choking!!! Teri still has her gold lame spacesuit from the film, and is rightly proud of the fact that she can still fit in it. Good for you, Girl!! 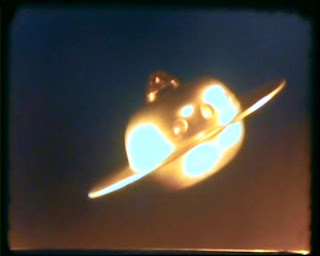 After the films, June and Howell continued to run Strobe Studios, whose photographic arm allowed amateur photographers to hone their skills by taking nudie shots of the glamour girls on Strobe’s books, which in the early 70s included Ava Cadell and a pre-David Sullivan, Mary Millington. June and Arthur themselves were persuaded back onto the big screen, albeit with their faces hidden by masks, as a kinky husband and wife duo in Stanley Long’s On the Game in 1973. Arthur continued to work as a stuntman and arranger in films like An American Werewolf in London and the first two Salkinds Superman movies up until the 1990s, he died in 2003. June, who married then divorced Howell in the 1990s, passed away a year later in 2004. Teri Martine moved to America in 1969, worked as a Playboy bunny for a time before embarking on a new career as a bondage model and photographer, a field she continues to work in today. June, Arthur and GHM may be gone, but June’s beauty, and the pop culture influenced world of espionage, naughty chinese mystics and foam meteors that Arthur and GHM dreamt up in order to show her off, vividly live on in these films. Teri’s versions of June in Orbit, Mission Possible and Secret Agent are the rare colour versions of these films, and are a big improvement over the grainy black and white copies of the Strobe films previously in circulation, which suffered from an ugly unnatural glow you tend to get with black and white versions of films originally made in colour. Teri can be contacted via her website www.terimartine.com, and tells me she sells the DVD for “around $15”, she can also be found regularly selling old and new photos of herself on Ebay. 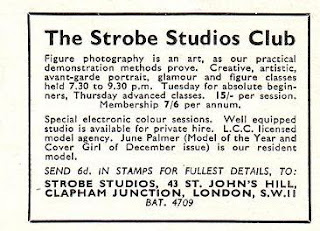