The Naked Quotes of Harrison Marks

Quotes from interviews with Harrison Marks from the 1980s and 1990s, several of these have been worked into the umpteenth update of the Naked World of Harrison Marks article http://gavcrimson.blogspot.com/2008/08/naked-world-of-harrison-marks.html
but I thought I should include them here in isolation as well for people who don’t want to scan through that epic again. I’ve also been able to unearth some pictures of the second Mrs. Harrison Marks- Vivienne Warren.

“Up until that time there were two or three very well known photographers who specialized in nude work. One was a bloke called Roy, then there was John Everard and Walter Bird. All their stuff was like love-locked-out through a mist. I photographed these girls as I saw them, with flesh and goose pimples- the lot.”

“Somebody suggested it to me, and I thought it was a good idea, which of course it was. The market was vast because all photographic shops stocked these things- Dixons were my main customer. We started off making 50 foot shorts, then I decided to do 70s, 100s, and 200s, which were 20 minutes long. Originally they were black and white, then we went big and went into colour. It was a big thing in those days.”

“Halfway through the filming, in walked a guy in a loud blue checked suit. He looked to me like a music hall comic. I asked my agent ‘Is he in showbiz?, he looks like a comic’ He said ‘Yea, he’s a really funny guy he’s got a gun in his pocket and he’s with the mob’.”

Mary Millington:
“She was a sweet girl, a lovely kid”

Janus and his initiation into the spanking business:

“All the characters in the book game used this pub and I got quite friendly with the lads who published a very popular spanking magazine called Janus. One day they asked me to do some films for them- this was before video, incidentally.”
“The chap who founded the Janus magazine was an old fella called Van Ocker. He was getting on a bit- in his 70s- and he was ill. The fellas that owned the magazine had no idea how to put a magazine together and didn’t particularly care. As long as it made money that was it. Anyway one day Van Ocker snuffed it. And I was in the pub listening to these guys say ‘what are we going to do’, then they said ‘hang on, George was in the publishing game for years’.”

Making Come Play With Me:

“I suppose I bit off more than I could chew. I wrote it, directed it, acted in it. I crawled off the set the last day so drained. I said to myself ‘if this is what its all about forget it’. But once a ham, always a ham.”

The unmade “The Reluctant Pornographer”

Childhood:
“I was brought up at a time of the most frightening anti-Semitism, Black Shirts everywhere and that fucking man Mosley holding meetings outside Hackney Town Hall of a Saturday night. We used to go to the Hackney Empire and my mother had to walk three-quarters of a mile round to avoid that fucking mob and she wasn’t even Jewish. ”

Wealth:
“you know I used to have three Rolls-Royces in the garage I must have been a cunt of the first order. What did I want with three?”

“I started to get letters from readers asking if videos were available. I thought I had better get into this as well. I’m doing this in a way I’ve done everything else. Giving people what they want with a bit of humour. They’re tongue in cheek, theres always a touch of comedy”.

Posted by gavcrimson at 02:14 No comments:

Would you trade in a 38-foot Cruiser to make a British Sex Film? 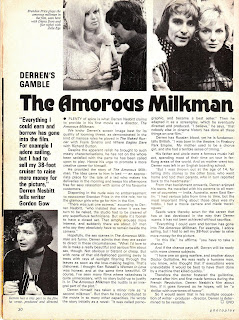