It Could Happen To You has to be one of Stanley Long’s most unusual productions, and in a career made up of films featuring randy taxi drivers, killer gnomes, wife swappers and moth women, that is saying something. The result of Long being asked to direct a film aimed at teenagers and warning of the dangers of post-pill, pre-AIDS, sexually transmitted diseases, it seems an odd bit of casting for Long to helm such a project, given that he was about to embark on his “Adventures of” series, whose heroes’ amorous antics regularly brought them into contact with angry husbands but whose plots politely sidetracked the touchy subject of VD.

The distributor who pitched this idea to Long, Michael L Green of Variety Films, seems an equally unlikely candidate for someone concerned with the sexual health of the nation’s youth, given that Variety were best known for distributing the likes of Flesh Gordon in the UK, as well as Derek Ford’s homegrown sex film output. Long ultimately made good on his side of the deal, making a genuine, forward thinking, sex education film that avoids the finger waving moralizing and hysterics that now makes the film’s clapdrama forefathers like Damaged Goods (1937) and Sex Madness (1928) high camp viewing. Long even managed to rope in a real life venereal disease specialist, Dr Robert Catterall of Middlesex Hospital, to provide onscreen narration and credibility to the production. Variety, on the other hand, eventually showed their true colours, and after a few play dates under its original title quickly reissued the film under the new title “Intimate Teenage Secrets” complete with a misleading X certificate and a sexploitation themed ad campaign. A decision that reportedly angered Long, but if nothing else validates the plot of his previous film, 1974’s Eskimo Nell, which had lampooned such ridiculous antics within the British sex film biz. Its not hard to imagine Eskimo Nell’s crafty distributor Benny U. Murdoch proudly claiming “I did this film called ‘It Could Happen To You’, didn’t take a cent, so what did I do? I changed the title to ‘Intimate Teenage Secrets’, and it cleaned up.” 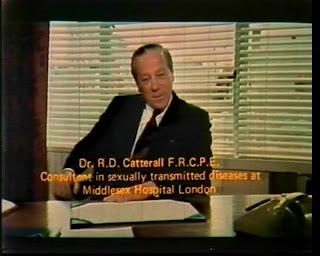 Michael Armstrong’s script centers around Mick (Eric Deacon) a hedonistic bloke whose social life seems to consist mainly of parties where rock music, drinks and snogging are the main ingredients, where people lose their inhibitions quicker than their clothes, and where even a quick blowjob isn’t out of the question. Naturally its not long before Mick is a card carrying STD sufferer, who inadvertently ends up passing VD around his social circle which includes his steady girlfriend Jenny (Vicky Williams), various dolly birds he meets at these parties, a swinging secretary (Sue Holderness), and -proving he has nothing if not stamina- when Mick isn’t partying hard he is also conducting an affair with an older woman (Rula Lenska) and gives her VD too. Just to illustrate that STDs aren’t just a heterosexual concern, a pair of Mick’s gay friends -depicted it has to be said in a sympathetic and non-stereotyped fashion- also have their own VD related problems. The film then takes a detour into the surreal when syphilis and gonorrhea literally appear, portrayed by actors Freddie Earle and Bernard Hill respectively, both dressed head to toe in white and sporting hats with ‘Syph’ and ‘Gon’ written on them. Mr. Syphilis and Mr. Gonorrhea are depicted like a pair of construction workers on their lunch break, enjoying a flask of coffee while commenting on the action and Mick’s follies. 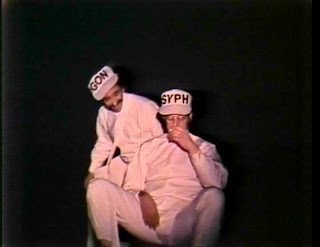 While Jenny is the first to notice the after effects of contracting VD, and takes to reading medical books about her condition rather than talking to her parents, it isn’t long before Mick himself is starting to notice all the nasty discharge emerging from his penis and eventually does the right thing and heads over to Dr. Catterall’s hospital in Middlesex to have his genitals examined by Catterall’s assistants. Catterall’s commitment to the film is beyond doubt, with the good doctor lending his face and reputation to the film, allowing the crew to shoot the film in his hospital as well as conduct vox pop interviews with his staff. Even more startling several of Catterall’s patients were on hand, and it seems quite happy, to body double for the film’s male leads, providing the film with some disease ridden full frontal shots for Long to inter-cut with the actors’ shocked reaction to their character’s downstairs predicament. There is even a note in the end credits mentioning the use of body doubles, added -one imagines- at the request of the film’s actors, who didn’t want audiences to think they were seeing their actual genitals onscreen, or that they really had VD.

With discharge, deformed babies and gynecological examinations the order of the day, it is at times grim viewing, and is surely the most un-erotic film ever made by a commercial sex film director. There are some leveling moments of humour as well though, particularly priceless are the antics of George (Richard Mathews), an old codger who has been carrying on with, and got VD from Sue Holderness’ secretary, and has to confess the double whammy of his office affair and his condition to his wife. Naturally the next morning he is shooed off to Dr. Catterall’s hospital complete with a bandaged head courtesy of his angry wife. Showing that VD isn’t a new thing, Long and Armstrong also throw in a period piece sequence that essentially serves as Long’s mini version of Carry On Henry, and depicts Henry VIII (Jonathan Adams, the ‘Lord Longford’ character in Eskimo Nell) as his usual beer gutted, lecherous self, distracted from the wit and wisdom of his Apothecary (Christopher Biggins) by a passing maid’s cleavage. A situation that leads to an embarrassing incident where Henry VIII’s genitals have to be examined by candlelight by his latest Queen (Veronica Doran), who nearly sets fire to the royal jewels in the process!!! 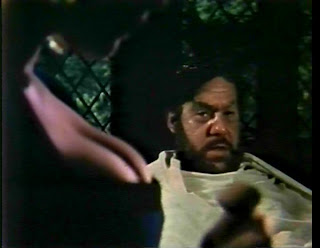 Long’s raiding of the DeWolfe music library for the film’s soundtrack also generates some amusement, due to several of the music tracks’ more familiar use elsewhere. Johnny Hawksworth’s “Up To Date”, better known as the theme tune to Man About the House, is here scored to a scene where one of the gay characters discovers a rash on his penis, while Herbert Chappell’s “Ragtime Razzmatazz” a.k.a. the ‘shopping’ music in Dawn of the Dead, is used as a cheery accompaniment to the characters informing their ex-partners of their condition and handing out Dr Catterall’s cards.

The main thought you keep coming back to when watching the film however, is Variety Films’ gross mishandling of the film as something for the sex film market, which seems inappropriate bordering on the completely perverse, given that -shot with a teenage audience originally in mind- the film hints at the characters’ promiscuous antics while showing as little flesh as possible. Even Mick and Jenny’s make out scene is quickly interrupted by Dr. Bob and more of his horrendous slides of diseased genitals (I’ll spare you any screenshots of that). The last thing an audience lured to a film by the promise of a good old X certificate and a title like Intimate Teenage Secrets, would have been expecting to see was a parade of puss oozing pricks, and its hard to imagine that kind of audience would have got much from the film, and even less likely they got off on it. 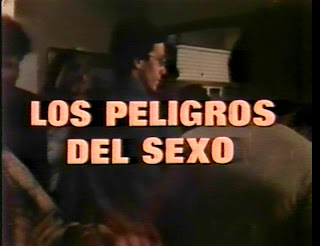 Long’s film was also released in Spain as “Los Peligros Del Sexo”, (which translates as ‘The Dangers of Sex’), a re-titling that suggests in Spain at least the film’s true intensions weren’t sidelined in favour of a sexploitation approach. It was under this title that the film was released on VHS in Spain sometime in the 1980s, which as far as I’m aware is the only video release the film ever received. Unseen in the UK since its theatrical play dates back in the 1970s, Variety Films eventually morphed into Entertainment Film Distributors a.k.a. Entertainment in Video, which today is run by Michael Green’s sons Nigel and Trevor, handles mega blockbusters like the Lord of the Rings series, and for whom an old 1970s film about VD must be a low priority for a DVD re-release. Maybe the Flipside boys could dig the film out for one of their BFI screenings? In the meantime it seems the only way to see the film is the Spanish VHS, which suffers from the handicap of being dubbed into Spanish, something that deprives the film of some of the finer points of Dr. Bob’s lectures and Armstrong’s screenplay, but offers up the novelty of seeing the Armstrong and Long repertory cast speaking (dubbed) fluent Spanish, as well as the chance to learn how to tell someone they have VD in Spanish. You never know, it might come in handy someday!!!
Posted by gavcrimson at 23:08 2 comments:

Here is the Youtube site of actor/musician Emmett Hennessey, who was one of the fictional “Orange Butterfly” band in the Derek Ford/Stanley Long film Groupie Girl back in 1969, he now lives in Trinidad and is still performing, acting as an MC and opening act for major stars, which is where these recent performances come from.

As well as Groupie Girl, Emmett was also in tons of British films and TV programmes throughout the 1960s and early 1970s, appearing in everything from Doctor Who and Cathy Come Home to Primitive London and even a few of Harrison Marks’ 8mm films. One of his earliest roles was in London in the Raw (1964), in a faked sequence showing down on their luck beatniks eating cat food, don’t be fooled though, he reassures me that the cat food in question was just cans of tuna that Stanley Long and Arnold Louis Miller stuck cat food labels on. Emmett is a super nice guy, and I’m sure the only person to have worked with both Harrison Marks and Michael Bolton !!!!
Posted by gavcrimson at 02:35 No comments: 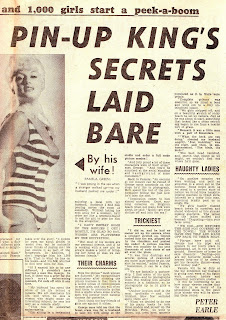 Three Harrison Marks related posts, kicking off with: A newspaper clipping from the Empire News and Sunday Chronicle (January 17th 1960) , I have it on good authority that Marks and Pamela Green were never actually married, but for reasons unknown pretended to be husband and wife throughout their relationship.
(For this site’s main Harrison Marks article: click here)
Posted by gavcrimson at 05:46 No comments:

Lastly here is an advert from a David Sullivan magazine circa 1978, for several big bust 8mm films Marks must have sold onto Sullivan, the actress referred to as “Vivetta” in the films' synopsis is better known as Clyda Rosen.
For this site’s main Harrison Marks article: click here
Posted by gavcrimson at 05:41 No comments: