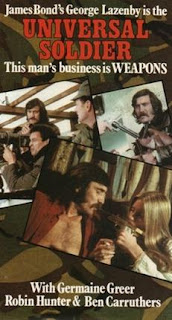 ..definitely one from the 'fascinating but I can see why it's forgotten these days' school of early 1970s Brit flicks, I suppose you could consider Universal Soldier the British equivalent of one of Tom Laughlin's 'Billy Jack' movies, what with its indulgent interludes of left-wing theater and political debate, its art movie aspirations and stubborn refusal to be the action movie that its audience wanted. Considering that it is from the director of Zulu and stars a former Bond, its story about an arms dealer (George Lazenby) ridden with guilt over profiteering from violence and war, invites a degree of autobiographical interpretation. Seemingly born out of a pacifistic reawakening, Universal Soldier is a simultaneously bold and aimless movie about a man trying to find direction and purpose in life, yet never really getting it together. Still you gotta love the amusing dishonesty of Universal Soldier's pre-cert VHS release, which hypes it as an action-fest ('James Bond's George Lazenby is the Universal Soldier...this man's business is WEAPONS') concealing 90 or so minutes of somber, soul searching around rain drenched pop concerts, the sleazy streets of soho and a drab London still very much hung over from the 1960s. As I say its forgotten status these days isn't difficult to understand, but when it comes to people you never expected to see onscreen together George Lazenby & Germaine Greer has to be up there with Billy Connolly & Richard Burton, Steven Seagal & Imelda Staunton, and Old Mother Riley & Bela Lugosi.

Trying to work out which film featured Steven Seagal and Celia Imrie! He was in Shadow Man with Imelda Staunton, though, who reportedly hated the experience.

Ms Imrie was in House of Whipcord, which she never gets asked about, alas.

Ahhh….. Imelda Staunton was the actress I was thinking of, not Celia Imrie. All this heat must be boiling my brain at the moment.

Thora Hird and Marlon Brando is another unlikely screen pairing.

Marlon devotes part of a chapter of his autobiography to The Nightcomers, and working with Thora Hird, specifically because he found her completely incomprehensible. Which is pretty rich coming from Brando.